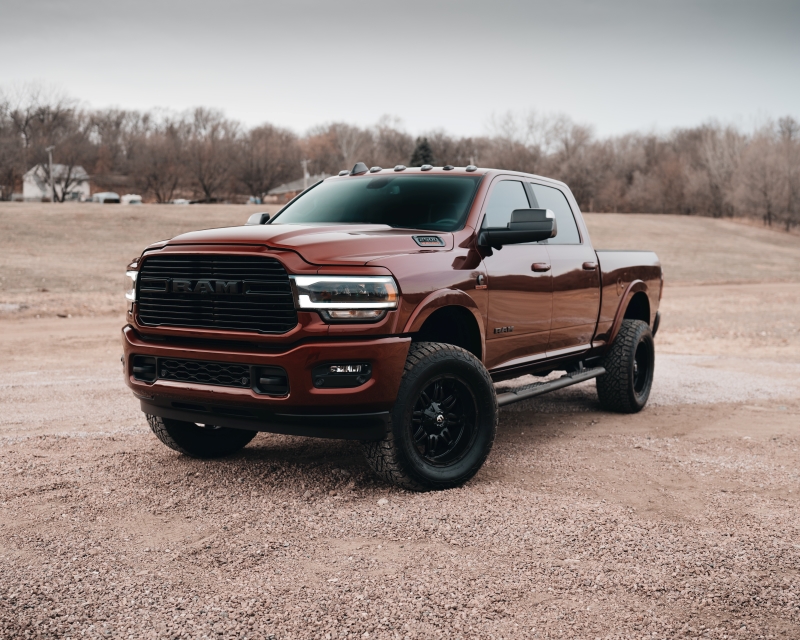 K&N has brand new intakes hot off the production line for 2019-2021 RAM 2500/3500 diesels, as well as multiple options for previous model years. If you have a 2500 or 3500, this is one performance upgrade that might be hard to pass up—and we think your right foot will thank you.

These brand-new intakes have been meticulously designed to provide some of the best filter protection from heat on the market. Colder air to your intake helps provide more power—and the removal of excess stock baffles helps give a satisfying engine growl on acceleration that returns to quiet once at speed. We think you’ll love the enhanced driving experience.

UP TO 50% MORE AIRFLOW = MORE HORSEPOWER

INSTALL YOUR NEW INTAKE AT HOME IN LESS THAN AN HOUR

Even if you aren’t a seasoned mechanic, you can still install your new intake in your home garage. K&N intake systems are engineered to incorporate factory mounting points and the factory mass air sensor. Installation can typically be completed in 60 minutes or less, and requires only simple hand tools.

Detailed, step-by-step instructions are included in your kit, and installation instructional videos are available on our website and YouTube channel for many applications. View the product page for the most up-to-date vehicle compatibility information.

An oiled High-Flow Air Filter™ (included in the kit) helps increase airflow to your engine—while simultaneously providing exceptional protection from contaminants. The oversized filter shape allows for up to 100,000 miles between cleanings (under normal highway driving conditions). When it does need to be cleaned, you can use K&N cleaning products to quickly and easily restore your filter’s performance. Each intake and filter is designed to last for the life of your vehicle.

Factory intake systems often feature intake tubing with tight bends, baffles, and other obstacles that can slow airflow and muffle engine noise—unlike K&N® intake systems, which are designed to give your engine a more satisfying growl on acceleration, but return to quiet once at speed.

Each intake system comes with a 10-Year/Million Mile Limited Warranty***.

THE CUMMINS DIESEL ENGINE: A BEAST SINCE 1989

Cummins Inc. has been a major player in engine manufacturing since it was founded in 1919 by Clessie Lyle Cummins. The Cummins Engine Company focused on developing the engine patented by Rudolf Diesel years earlier. With decades of experience developing and building diesel engines, it was no accident that Dodge began offering the Cummins Diesel-powered Ram pickup in 1989. The Cummins Diesel engine-powered first-generation Dodge Ram soon became a viable alternative to large gasoline-powered V8 engines. In fact, the Dodge Ram diesel was beating its competition from General Motors and Ford by being the only member of the big three to offer a turbo diesel engine; in addition, the 5.9L Cummins 6BT 12-valve diesel was direct-injected and didn't rely on glow plugs for cold starting.

Despite the Cummins Diesel engine, the first generation Dodge Ram, merely a face-lifted carryover of the Dodge D-Series which had been around since 1972, sold poorly compared to its counterparts from Ford and GM—until 1994, when Dodge introduced the second-generation Dodge Ram pickup. The fully redesigned 1994 Dodge Ram 1500 immediately became a sales success. Dodge carried over the 5.9L Cummins 6BT 12-valve diesel engine as an option for second-generation Ram 2500 & 3500 models. Although the Cummins 6BT 12-valve 5.9L L6 Diesel outperformed the 5.9-liter LA/Magnum V8 engines found in the first-gen Ram, Dodge introduced the 8.0L Magnum V10 engine as an option for 1994. The 8.0L Magnum V10, basically a cast-iron version of a Dodge Viper engine, was the most powerful gasoline-burning pickup truck engine of the time.

Get More Power from Your Diesel with a K&N Intake

All engines are essentially a giant air pump—and anything that can be done to eliminate restrictions on the intake and/or the exhaust will likely improve performance, but we often see the most dramatic gains in modern diesel engines. Large displacements and variable vane turbos demand incredible amounts of air in order to run at peak efficiency. A K&N intake will nearly eliminate intake tract restriction and enable an engine to breathe easier, resulting in more power. Best of all, a quality aftermarket diesel air intake system offers simple bolt-on installation and an incredible bang for the buck.

"Great kit. Been in use on my Dodge Cummins truck for 10+ years." - Eric from Arizona

"This product was exactly as advertised and gave my truck a very noticeable horsepower increase. Very impressed with results for the money." - Andy from Illinois

"Truck runs smoother than it ever has and starts easier. Increase in fuel miles per gallon maybe by 10 to 20 percent. It pulls my trailer up hills without shifting down. It would be very hard to go back to original equipment. Thank you K&N." - Donald from Wyoming

2010 ushered in a new generation of heavy-duty Ram 2500 & 3500 pickups, as well as a restructuring of the Chrysler Corporation, officially FCA US LLC. Now owned by holding company Fiat Chrysler Automobiles, Ram Trucks became its own brand that no longer fell under the Dodge umbrella. While the 6.7L L6 Cummins diesel engine has been carried along since its introduction in 2007, both the fourth-gen Ram Truck and its Cummins diesel engine have undergone enough changes to necessitate different intake systems for 2010-2012 Ram 2500/3500 Cummins powered pickups and 2013-2016 Ram 2500/3500 Cummins diesel trucks. Much of these changes revolve around increasingly tighter emissions regulations, more stringent electronic engine controls, and sensitivity to inlet air temperatures.

Keeping with the trend of increasingly tighter emissions regulations, more stringent electronic engine controls, and sensitivity to inlet air temperatures, Ram Trucks engineers had to get creative with the 2013 and later Ram Trucks 2500 and 3500 Cummins 6.7L diesel pickups. Ram Trucks engineers developed a new diesel air filter box technology that they call "Ram Active Air". The Ram Active Air box is a dual-inlet type diesel air filter box with the ability to vary the source of incoming air. In normal driving conditions, air is drawn from a protected source under the hood. As under-hood temperatures rise, the Ram Active Air filter box switches to a system drawing air from directly behind the truck's front grille. Ram developed this system to combat power loss in hot, dry, up-hill conditions when temperatures under the hood have been shown to climb to extreme levels.

"I'm very satisfied with this product. There is not an after-market cold air intake for the 2014 Ram. The factory intake box works great just needed this intake tube to open up the airflow." - Robert from Texas

Some intakes are not legal for sale or use in California on any pollution controlled motor vehicle. Refer to product pages for detailed information.

*K&N intake systems can typically be installed in less than 60 minutes.

**Horsepower gains vary among products and applications, but each K&N performance air intake system is designed to increase airflow efficiency for specific vehicles and their engines. Each kit undergoes significant testing to help ensure that the filter and intake tube are engineered to deliver large increases in airflow and horsepower. Please visit individual product pages to view horsepower estimates for your specific vehicle.