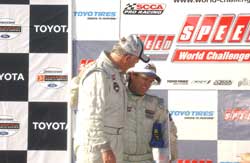 Mike McCann and Rob Foster at Long Beach Grand Prix
“There was no time for my brakes to cool off and they started to go toward the end of the race,” said McCann. “Just before the next to the last corner Ron Fellows made an aggressive outside pass in his Cadillac. In my attempt to re-pass Ron I got between gears and allowed Tommy Archer to go by. I went from first to third with only one corner to go.”

McCann was third in the #82 McCann Plastics/K&N Filters/Dodge Viper, 1.338 seconds behind Fellows. Fellows edged Tommy Archer by 0.730 seconds and won the inaugural SCCA SPEED GT Championship on the Streets of Long Beach.

McCann said he never gave a thought of bumping Fellows out of the way as the driver of the Cadillac made his pass. “I don’t drive that way. He made a good pass, and he deserved it,” said McCann. “I just thought, wow, I can’t believe he (Fellows) did that, it was really good. Then I made the mistake of grabbing the wrong gear and Tommy moved in as well.”

“Competition is my whole life,” said McCann. “We’re in this for the championship.” The SCCA Pro Racing SPEED World Challenge consists of 11 races beginning at Sebring in March and ending in October at Laguna Seca, California.

McCann uses K&N Engineering oil and air filters in his cars. “I’ve used K&N since I was a kid racing motorcross,” said McCann. “I was 10-years-old then, now I’m 43.”

McCann said when he thinks about high-performance he thinks of K&N. “When K&N started making filters for Vipers, putting on the K&N filter was a necessity,” he said.

The next round of the SCCA SPEED GT Challenge series will be May 19-21 at Mid-Ohio Sports Car Course, in Lexington, Ohio.

Follow McCann Racing's progress throughout the racing season at the K&N news site.  Find K&N products for your vehicle using the K&N application search then use the K&N dealer search to find a K&N dealer in your part of the world.
Categories
Recent posts
Tags
cold air intake 2019 K&N 2018 intake kit
My Wish List
Last Added Items
Go to Wish List
You have no items in your wish list.