One of the most wanted vehicles by consumers in 2005 is listed as the redesigned Ford Mustang GT with retro styling. There are color options, interior options and power options for every buyer.

When it comes to buying a new car, the selling term "options" means a whole lot more than satellite radio and a DVD video with surround sound. K&N Engineering has designed a custom aerodynamically engineered tube that gives the 2007, 2008 and 2009 Mustang GT even more power options.

K&N Engineering has adapted the hydrocarbon trap designed by Ford into this new intake for applications that utilize it. As the vehicle stops, the hydrocarbon gases that have not burned, along with the fuel that is still inside the intake manifold work back through the engine. By incorporating this honeycomb looking hydrocarbon trap into the intake, these gases are restricted from escaping into the environment as in the factory intake system. Also once this kit is installed, K&N guarantees more horsepower.

It takes 90 minutes or less to install, and can last up to 100,000 miles before service is required, depending on driving conditions. There is also a million mile limited warranty on the K&N 63 Series Intake Kits also known as AirCharger Air Intakes.

The K&N intake kit, installed on the Ford Mustang GT is an aggressive powerful addition to an icon.

Go to www.KNfilters.com to find a K&N dealer near you.

If you own a 2003 or 2004 Toyota 4 Runner with a 4.7L engine you are in luck! K&N recently released a new 77-Series intake system, part number 77-9022KP, for the 2003-2004 Toyota 4 Runner which is guaranteed to provide more horsepower. In fact K&N tests have shown a horsepower gain of 12.77 HP @ 5007 RPM for this intake. You can especially feel this added power and torque when accelerating and when towing a load. This intake, like all other K&N intakes, was engineered specifically to work within the vehicle's computer specifications while maximizing power and allowing air to flow with little restriction. One noticeable design characteristic of this air intake is the reduction in diameter just before the mass air sensor. It would be far easier to use the same diameter throughout but that won't provide the best engineered solution! 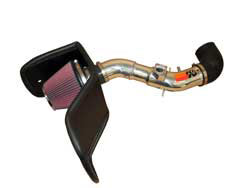 K&N 77-9022KP High Performance Air Intake for the 2003 or 2004 4.7L 4-Runner
It takes about 90 minutes or less to install this kit and the lifetime K&N air filter performs for up to 100,000 miles before service is required. You would go through a lot of clogged paper filters before this K&N filter will need servicing. There is also a million mile limited warranty on all K&N 77-series high performance air intake systems. K&N manufactures hundreds of air intake kits.

Use the K&N application search to find one for your vehicle then use the K&N dealer search to find a K&N dealer near you.
Owners of a 2006 Hummer H3 with the 3.5L engine now have the opportunity to add 16HP with the addition of a K&N 77-Series Intake System. In testing at K&N this intake, part number 77-3044KP, provided a 16.46 HP gain at the real wheels when compared to the factory intake system. The intake is easy to install, requiring a few basic tools: socket set, two wrenches, a screw driver, and an Allen wrench. 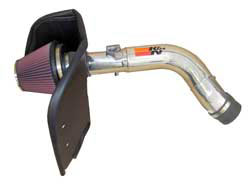 K&N 77-3044KP Air Intake for the 2006 3.5L Hummer H3
This 77-Series air intake was engineered specifically for the Hummer H3 and its computer's electronic specifications. The intake has a slightly smaller diameter on the filter end with engineered components strategically placed to ensure air flow characteristics fall within the vehicle's computer parameters while maximizing power at the rear wheels. The design incorporates a heat shield that takes advantage of the existing stock factory inlet to bring in cold air outside the engine compartment. The intake's polished finish, cost, and ease of installation make it one of the best horsepower additions available for the H3.

The 77-3044KP can be obtained through most national auto parts store chains as well as through many performance shops, auto repair facilities, and online stores. Go to www.KNFilters.com to find a K&N dealer near you.
RIVERSIDE, CA - GM trucks and SUVs have become a staple of American life. They're safe, comfortable, utilitarian and more cosmetically appealing than the average minivan. Though impressive in the power department, a little more horsepower is always helpful with these haulers. With the addition of K&N Engineering's new 77-Series intake kit (PN 77-3050KP), 2005, 2006 and 2007 Chevrolet (Chevy) Silverado, Tahoe, Suburban, Denali, Yukon and Cadillac Escalade owners can appreciate an 8+ horsepower gain at the wheels accompanied by a newfound growl under the hood.

All 77-Series Intake Systems utilize high-strength, mandrel-bent, aluminum intake tubing, engineered to create a smoother, less resistant path for air to travel into the engine. The powder-coated heat shield included with K&N's 77-Series Intake Systems helps to maintain a cooler intake charge. The result is increased power and torque where you need it. Better engine efficiency typically results in improved fuel mileage as well. Designed to work in conjunction with the metal tubing, K&N's 77-Series Intake Systems incorporate a K&N High-Flow washable/reusable air filter that can last up to 100,000 miles between cleanings and full stainless-steel installation hardware.

Designed to be installed with simple hand tools in under 90-minutes, the K&N Filter can be cleaned with K&N's (99-5050) cleaning kit for a lifetime of high-performance filtration and protection. Available in a multiple high-quality finishes, the 77-Series GM truck and SUV intake system is street legal in most states and includes the famous K&N Million Mile Limited Warranty .

The 77-3050KP will also fit the following vehicles:

Phil Cooper, one of K&N’s UK supported racers has scooped both the British Autograss Championship class nine title and the prestigious overall title.  Driving the 300bhp Lexus touring car engined special, the 20 year old beat off strong opposition from over 500 competitors to snatch the title by one point in the final race of a long season.  This adds to his 2003 B.A.S. class nine, 2005 North of England, 2005 MAP Open, 2005 Dash for Cash, 2005 Yorkshire Open and 2005 Evesham Open titles.

A grand total of 51 wins from 70 starts and a further 10 podium finishes ensured a great season for the team.  Phil stated he was delighted to win the title despite some setbacks earlier in the year as he thanked all his sponsors especially K&N!  Cooper MotorSport uses the K&N universal airbox system (56-9188-1) mounted directly on the trumpets of the throttle bodies.
RIVERSIDE, CA - With a 250-horsepower, turbocharged, all-wheel-drive platform, the 2005, 2006, 2007, 2008 and 2009 Subaru Legacy GT are true performers. Now the Legacy GT can share a legacy of race-winning performance with K&N's 69-Series Typhoon® Intake System. The 69-Series (PN 69-8003TFK) brings guaranteed horsepower and acceleration improvements to the Legacy GT as well as show-quality looks under the hood.

The Legacy GT 69-Series Typhoon® intake utilizes a mandrel-bent, powder-coated flat-black intake tube for smooth air-flow from the filter. As with all Typhoon® Intake Kits, a Washable/Reusable K&N High-Flow Air Filter is included. This dual velocity-stack filter is made from oil-impregnated, epoxy-coated aluminum wire mesh for pain-free maintenance and is backed by the K&N Million Mile Limited Warranty®.

The 69-Series (PN 69-4516 TS) is currently available in a silver powdercoated finish and includes stainless steel installation hardware, high-flow filter, K&N DryCharger® wrap and high-quality silicone plumbing. In just 90-minutes of wrenching every Cobalt SS owner can have a cool under-hood growl, gobs more torque and an underhood look to set them out from the rest.

RIVERSIDE, CA - The 2005, 2006, 2007, 2008 and 2009 Mustang marks one of the biggest unveilings of a Ford vehicle since the Mustang's inception back in '64. With its retro-styling, wild interior and unique engine design the 2005 to 2009 Mustang GT has a platform just waiting for performance upgrades. K&N answers the call with their new AirCharger® Intake Systems, which produced consistent gains of 15 horsepower on the GT (part # 57-2565) and 7 horsepower with the (Part # 57-2566) at the rear wheels on K&N's in-house Dynojet dynamometer for the 2005 Ford Mustang with the 4.0 liter engine.

The key to the lil' pony's new found power lies in the AirCharger's unique, low-restriction intake designed to drive massive amounts of air into the engine. K&N's team of engineers have designed the Mustang AirCharger to reduce restriction while offering increased levels of engine protection via the pleated, oil-treated, cotton mesh filtration media that K&N invented more than 35 years ago.

Street legal in most states, the 63-Series Mustang AirCharger can be installed with basic hand tools in under 90-minutes! Backed by the famous K&N Million Mile Limited Warranty your AirCharger will provide outstanding performance year after year. When it does come time for a cleaning, just pick up K&N's 99-5050 High-Performance Air Filter Recharger® Kit (sold separately) and bring your K&N Filter back to life.

RIVERSIDE, CA - Everyone love trucks, and when it comes to reliability, fit and finish and overall satisfaction, few do trucks better than Toyota. The all-new 2005 Toyota Tacoma boasts an array of new features including an all new interior, new exterior styling and a potent V6 powerplant. With the addition of K&N Engineering's 63-Series AirCharger (PN 63-9025), V6 Tacoma owners can expect to gain an additional 10 horsepower at the rear wheels while still maintaining their factory warranty.

The key to unleashing the hidden power in the 2005 Tacoma is a combination of more air and smoother airflow, which is provided by K&N's pleated, oil-impregnated cotton-mesh High-Flow Air Filter. The counterpart to the AirCharger 's filter is it's roto-molded, custom-designed intake tube, which gives the engine a smoother intake path for improved acceleration and throttle response.

Designed to be installed with simple hand tools in about an hour and a half, the Tacoma AirCharger is backed by the famous K&N Million Mile Limited Warranty and can be serviced as often as needed with K&N's (99-5050) easy-to-use filter recharger kit.

As any utility equipment user may notice, the surface area on the K&N Filter is much larger than the stock unit providing a substantial gain in air-flow. This significantly larger, pleated filtration area combined with a highly effective design allows for greater service intervals (more riding, less cleaning) and significant increases in air flow (NOTE: because of the increase in air-flow, you may need to re-jet your vehicle). The four layers of woven cotton media allow for increased filtration - better than typical stock, two layer, foam filters. Combining these elements with our built-in, protective backfire screen, K&N's Kawasaki KVF750i filter offers a significant increase in torque for your utility ATV as well.

Designed to be installed with simple hand tools, the K&N Filter can be cleaned with K&N's (99-5050) Recharger® Kit for a lifetime of high-performance filtration and protection. In addition, K&N offers a complete line of Performance Gold Oil Filters for powersports and street vehicles (KN-204 for the Brute Force 4x4i).