Your next purchase when you sign up for our newsletter

Donny Schatz celebrated his 69th career World of Outlaws A-Feature win in the Snap-On Tools No. 15 J&J with K&N Engineering Products at the Polydome Princeton National. The Princeton, Minnesota win moves Schatz up the ladder in the Outlaws carreer win leaders list, he is now within one of Dave Blaney who has 70 wins and is in 6th place overall. 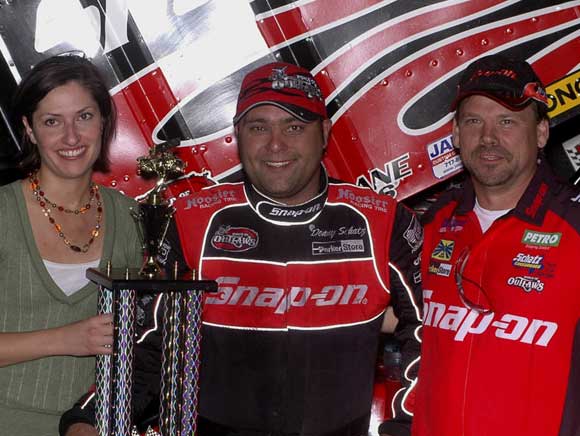 Schatz uses a K&N Carbon Fiber Air Box
Schatz opened the program by qualifying 10th in the field of 38 cars. A second heat race victory put him in the Crane Cams Dash where he started sixth. In the eight-lap Dash, Schatz moved up to third, which is where he started in the 40-lap A-Feature.

The Fargo, North Dakota racer moved his way around the high-banked quarter-mile dirt oval until a caution flag stopped the action on lap 21. There were several more restart attempts before Schatz had the opportunity to take the lead away from Chad Blonde. Schatz managed to withstand a few more restarts to score the win.

“The race was a pretty tough struggle,” said Schatz. “Chad Blonde was setting a good pace, but I knew we just had to keep working on him. We lost our brakes early in the race and I really had to finesse the car. We had a great car and we just hope to continue to win races from here on out.”

The victory was his 18th World of Outlaws win of the season. Schatz and the Global ParkerStore sponsored team with K&N Engineering products continue to lead the 2007 World of Outlaws standings. They return to action next Saturday at Tulare, California.

Follow Donny Schatz 's progress throughout the racing season at the K&N news site.  Find K&N products for your vehicle using the K&N application search then use the K&N dealer search to find a K&N dealer in your part of the world.
Categories
Recent posts
Tags
cold air intake 2019 K&N 2018 intake kit
My Wish List
Last Added Items
Go to Wish List
You have no items in your wish list.